Snow, snow, and more snow. So far the winter of 2016/2017 has been nothing short of good news for our mountain snowpack’s throughout much of Idaho and the West. As we approach spring, we can be highly optimistic that this snowpack, in turn will provide a solid spring runoff and good water for all the rivers this coming summer.

All of our Snake River Drainages are well above average for snowpack and water content so fingers crossed, it’s looking good! Do keep in mind that we still have another 2 months of snowfall accumulation to go, and in that time period a lot can change. But as of now, things are looking good. Lets break it down on some of the local snowpack drainages that feed the Boise River, Owyhee River, and our Eastern Idaho Rivers.

As of February 6th, The Owyhee River drainage is at 154% of normal snowpack for this time of the year. Of the many tail water rivers we enjoy, this river system needs as much snowpack as they can get to ensure us a great summer of fishing, and ample flows that will stay cool and last into the fall. This winters snowpack can potentially give us a much need cushion from the drought the region has been plagued by. As I’m writing this, the Owyhee River gauge station at Rome is recording 20,000cfs from the big rain on snow event we had, and could cause a major blowout below the dam this spring. We may be throwing streamers for brown trout in the sagebrush! In my opinion the river is in need of a big flush. And short term although it may be somewhat un fishable, it will ensure a healthier fishery in the future. I expect another great season of dry fly fishing, solid flows, and cold water on the Owyhee River, fingers crossed!

For the Boise River drainage, it is at 127% of normal snowpack for this time of the year, and again, we can be highly optimistic that we will have solid fishing on the South Fork of the Boise tail water, as well as the middle, north, and upper south fork throughout the summer. Expect once runoff levels out, the freestones of the middle and north fork should fish well throughout the summer, as compared to previous years where snowpack was low, and water temperatures rose earlier in the summer making the window of good fishing small. We may have another start on the south fork where flows will be to high to float effectively, but once those level out. It should be another great summer, so start cleaning off the drift boat and rafts and get ready for the big bugs!

The Henrys Fork, Teton, and South Fork of the Snake are on the way for a great water year as well. The Henry’s Fork and Teton Drainage are at 115% snowpack and the Upper Snake River drainage above palisades is at 142% of normal snowpack. We just need these next two months to keep the snowpack’s at or above normal, and to have a normal spring run off. All that being said, Eastern Idaho should have a great summer season so start tying your favorite summer pattern and get ready! 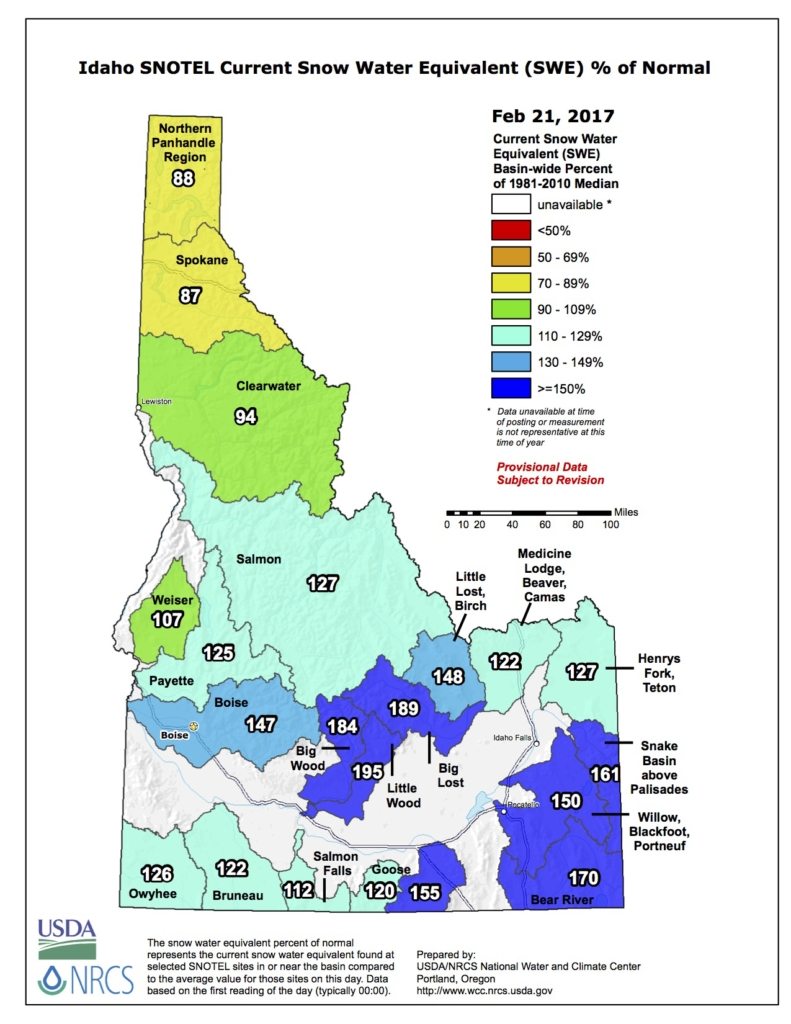