H3 Fly Rod Review: A Day with the Orvis Helios 3

I stopped by the shop with my lifelong friend to grab a few extra flies and gear that had been working great for me before we hit the water. Now that business was taken care of, new leaders, tippet, hot flies picked out, which happened to be a soft hackle PMD and yellow hoppers, and we were headed out the door to our favorite taco truck before we hit the river. Just before we left the shop, my buddy noticed the new Orvis Helios 3 – 9′ 5wt D on the rack all rigged up and ready to cast in the lot. He said, “hey ask Nick if we could take that out today?” The thought of fishing that rod for the day got me excited because after casting it in the lot outside a day or two before I knew it would be my next rod. My awesome manager said it would be okay to try the fly rod out and instantly our day of fishing got a whole lot better!

After filling up on cheap authentic tacos and a short drive later, we had arrived at one of my favorite stretches of water, all to ourselves. I rigged the H3 with a tandem nymph rig, small split shot, and a strike indicator. My go-to set up before the hatch kicks off, and bugs start flying. Within ten cast I had a beautiful brown trout on my line. It turned out to be one of the prettiest browns I have caught, or my clients had pulled out all summer. Automatic day made. I continued to work the run and BOOM, set the hook, and a super hot fish took me all the way into my backing in a matter of seconds! I can say with confidence that the H3 paired with the Hydros SL 2 got me that fish due to how smooth it fed line after this fish had explosive burst in practically every direction in the pool until it sprinted down the river. The reward was a very round lively rainbow trout. After pulling another rainbow trout out and losing some other fish, we took a break at the truck before heading up the river.

The next spot we stopped was a bank neither of us had fished before. A very short section of pocket water with a deep cut bank where we just knew there had to be a beautiful fish. As soon as we got in the water, there it was, the tail of a big brown sliding back under water after sipping a pmd, game on! I tied on a yellow hopper my buddy was swearing to me was the best hopper ever, and I gave it a go. I cast and cast dodging the overhanging branches and just couldn’t get the eat. My buddy tells me to hand him the rod because he is feeling his luck and knows exactly where the fish ate last. I hand it over disappointedly, and of course, the fish comes up and sucks the yellow hopper under on his second cast! You could have heard our yells of excitement all through the canyon.

We stopped back at the truck as the hatch was starting to materialize and we had begun pinpointing our targets for when we got back in the river. There were a few nice browns on the far bank sucking down pmd’s one by one as they floated down the river. We knew the routine, make the drift and catch the fish, mess it up and game over. My buddy took the H3 fly rod and made his drifts and just couldn’t get the eat, so I told him to let me tie my favorite pattern on and give it a shot. Of course, it worked out the same as the hopper scenario before me, and I hooked into 20 inches of buttery brown trout on my second cast! After a few more fish we decided to call it a day or else we would be stuck fishing till dark and get home way too late.

Overall we had an incredible day of fly fishing, one I won’t soon forget. The Helios 3 paired up with the Hydros SL 2, and a slick shooting line was by far, without a doubt, the nicest set up I have ever fished. It was so light in my hand that casting with precision was completely natural. I felt like I could pick apart the water, seam by seam, with less effort than ever before. Once I started using hoppers and dry flies it was just as easy. Pick the fly up and put it right where I wanted it, effortlessly. I know I don’t have a rod in my arsenal right now that I can start out nymphing, toss hoppers, and finish casting with size 18 dry fly and have the same amount of confidence and effortlessness in all three categories. Honestly, this rod has raised the bar, and all others will have to live up to it. Orvis has done it again. 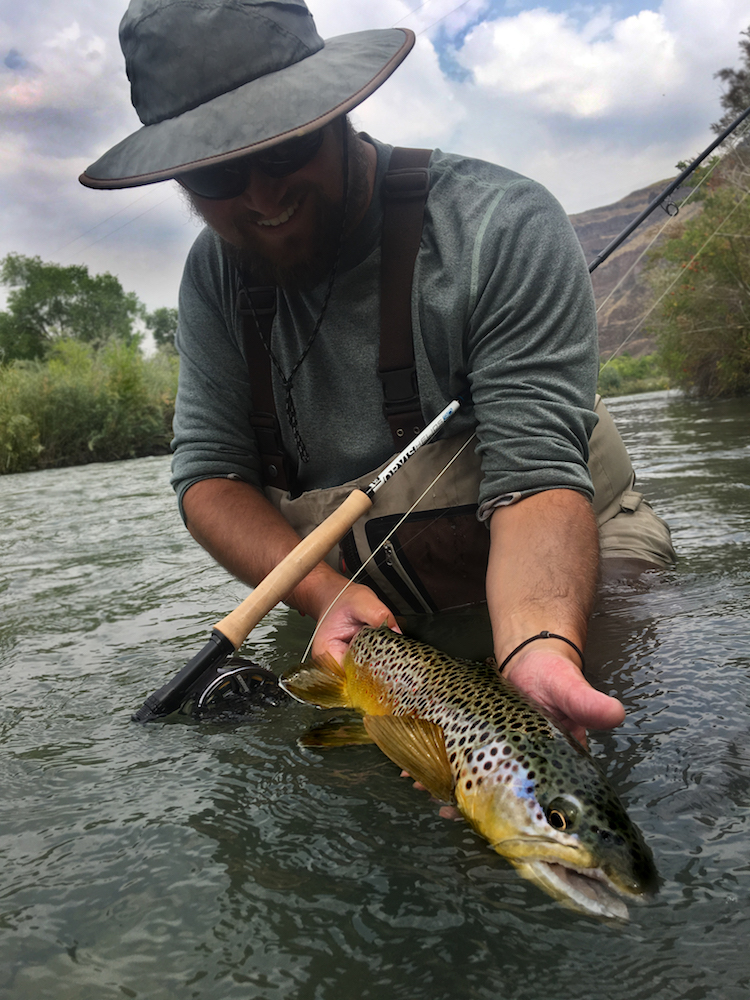 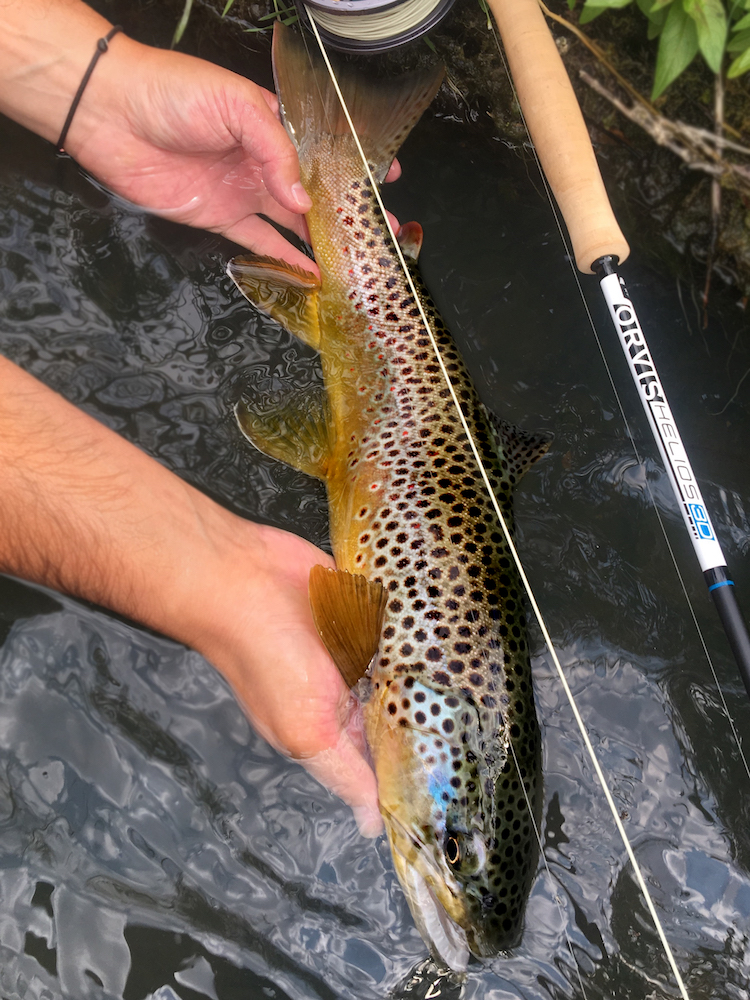 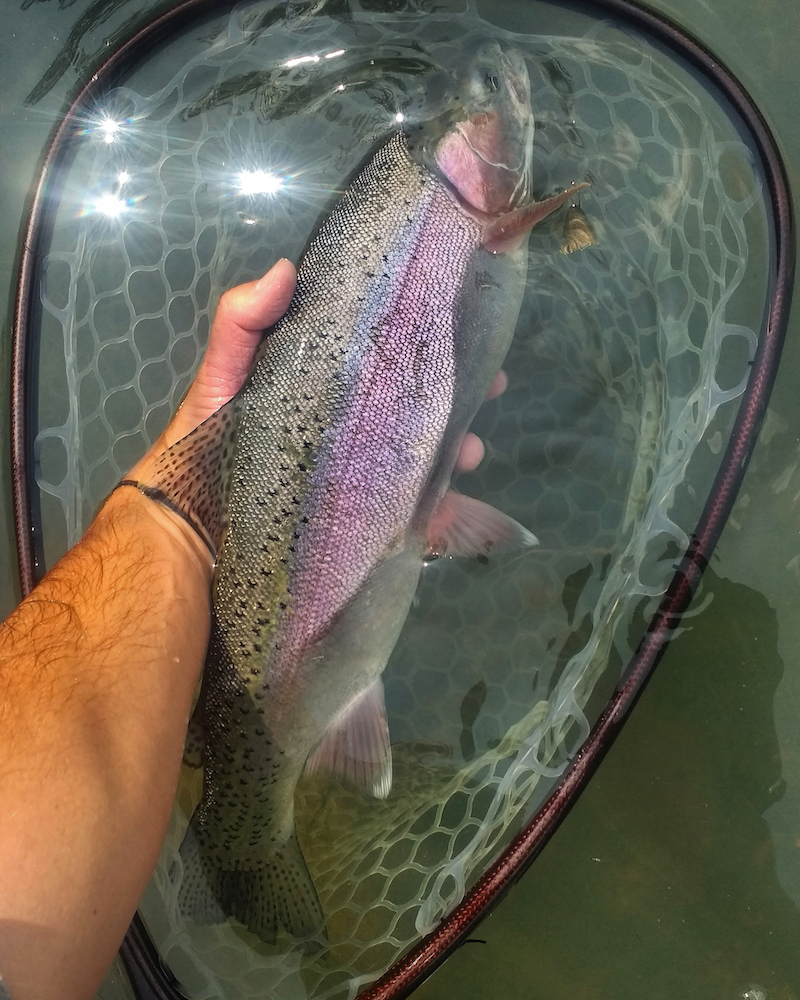 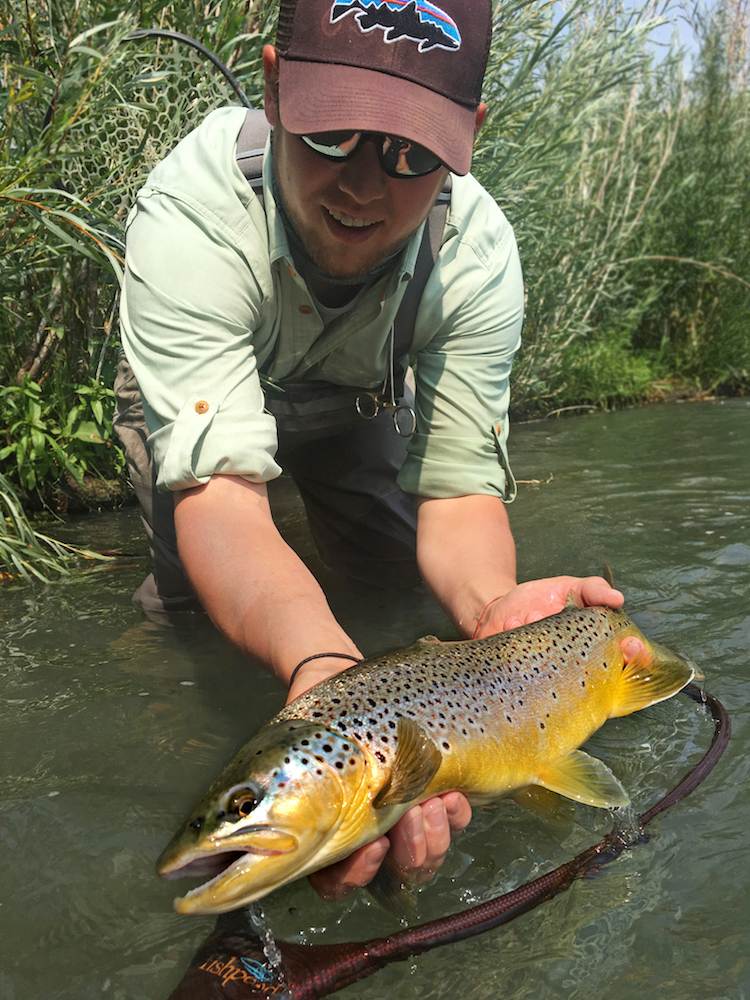