Doug Gibson has been fishing for over 60 years. Doug started guiding in 1972 and was instrumental in starting the guide program at Three Rivers Ranch when it began in 1974. A true gentleman, his expertise and experience are not only admired by his guests and peers, but were also recognized by Orvis, when he received the Orvis Guide of the Year award. Having spent his entire life in the area, Doug possesses a comprehensive knowledge of the region’s rivers and streams, flora, fauna, mountain ranges and history. His love of fishing has taken him to many other parts of the world including Massachusetts, Missouri, Florida, Bahamas, Chile and the upper northwest. Doug was born in Newdale, Idaho, and still resides there with his wife Sandra.

Paul was born in San Jose, California. He began fly-fishing at 27. ‘I was hanging out with a buddy in Portland, Oregon, he handed me a fly rod and I’ve been hooked ever since.’ Paul has been guiding for Three Rivers since 1981 and “still has the passion”. “My favorite stretch of river is the Fall River. It’s the best rainbow wade fishery in Eastern Idaho.” Paul has fished all of the Rocky Mountain States, Chile, and parts of Canada. ‘Three Rivers Ranch is better than any place I’ve been around. The guides are professional and have so much experience to offer. Lonnie’s attention to every detail about the ranch makes each guests experience special. The guides are like brothers and there’s a real family atmosphere that guests become part of.’ Paul lives in Warm River, Idaho and has two sons. 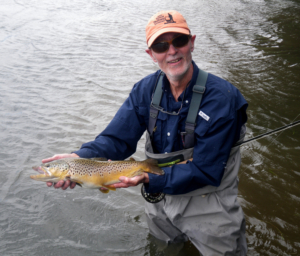 Cliff grew up in Bergenfield, NJ where, from the age of 5, he fished for anything he could. He taught himself to fly fish at age 12 and to tie flies shortly thereafter. That early obsession evolved into a lifelong passion—flyfishing for wild trout. He loved fishing the Beaverkill and Delaware River system and began fishing the Greater Yellowstone area in 1985. He started spending summers and guiding in Island Park in 1987 and has been with Three Rivers since 1989.

Cliff’s emphasis has always been on dry fly fishing. “There’s nothing like actually seeing the fish eat the fly. Because Three Rivers is licensed on a wide array of water we have the ability to provide excellent dry fly fishing opportunities throughout the season.” He’s also a patient instructor who enjoys teaching beginners as well as sharing the entire experience. “I’ve always enjoyed teaching others what I’ve learned about flyfishing. I get a great deal of satisfaction from helping someone connect with flyfishing or up their game. That connection extends to the entire experience, not just catching fish. There’s so much to appreciate about being in the places trout live. Insects, birds, animals, flowers, trees, scenery are all part of the experience.”

Cliff moved to Island Park in 1991 where he lives with his wife Lisa. In addition to guiding Cliff and Lisa tie flies professionally, raise English Setters, and travel extensively to hunt and fish every fall and winter.

Skip grew up in many beautiful areas throughout the greater Northwest which led to his love of fly fishing and spending time in the outdoors. Both his grandpa and mother were instrumental in teaching Skip to fly fish.  His grandfather started him fishing with a fly rod and spinning reel, when he was “maybe three”,  which Skip says helped him get the feel for fly casting with a fly rod when he was very young.

Skip has spent the majority of his life on the water fishing, teaching, exploring or guiding. He started  guiding for Three Rivers Ranch in 1996. He loves his clients, the area and his ‘extended family’ at Three Rivers. These relationships are what has kept Skip part of the Three Rivers family for so many years.

During Three Rivers off season, Skip has spent the past twenty years essentially pioneering fly fishing in the Aysen Region of Chilean Patagonia. Together, with his partners he has been instrumental in designing new fisheries, starting two fly fishing lodges- Dragon Fly Lodge and Tomango Lodge and also designed and manufactured special boats (part jet boat/ part cataraft) that allow anglers in these regions access to water on both rivers and lakes that very few other outfitters have access to.

Having grown up with Three Rivers in his blood, Mitch began fly-fishing when his dad, Don taught him when he was in the 4th grade. His skills were perfected through many fishing trips with his grandfather, Harry Lewies, who started Three Rivers Ranch in 1974 as well as his mother, Lonnie. Mitch has been guiding for Three Rivers since 1995. His career started as a passion for fishing and a cool summer job. That passion hasn’t left. “Personally, my favorite stretch of river is the Teton River. The fish are tough and hard to catch, but there are a lot of big fish in there, especially cutthroat. Mitch and his wife Brandi live in Ashton, Idaho with their three girls. He enjoys archery hunting, college football, traveling and camping with family and friends in his spare time.

Nick was born and raised in Boise, Idaho where his dad taught him to fish on the South Fork of the Boise River, Salmon, and Owyhee at the ripe old age of 7. He was rowing a boat by 16. Once out of high school, Nick’s excitement for fishing took him on a road trip through Eastern Idaho, and parts of Wyoming and Montana looking for just the right place to begin guiding. His search brought him to Three Rivers Ranch, where he completed guide school and began his career as a full time guide in 2005. ‘I love the challenge of the Henry’s Fork. It offer’s good, dry-fly fishing, large wild rainbow, browns and unbelievable scenery.’ Nick lives in Ashton, Idaho. He enjoys fishing, golfing, long walks on the beach, and college football in his spare time.

Eric was born and raised in Soda Springs, Idaho. He began fly-fishing around 6 years old when his mother taught him while growing up in southeast Idaho. Eric attended college at Montana State University, where he earned a degree in Biotechnology. His enthusiasm for fishing continued throughout college and eventually landed him at Three Rivers Ranch where he began guiding in 2003. ‘There’s a great camaraderie at the Ranch. Lonnie is great to work for and the guides are not only co-workers but also friends. We often take off and fish together when we have free time or during the off-season. I grew up fishing the South Fork of the Snake River and love those lower stretches, but I must say the lower Henry’s Fork is awesome because of the size and quality of the fish.’ Eric lives in Ashton, Idaho.

Todd grew up in Nampa, Idaho. His dad taught him to fish on various lakes, rivers, and creeks in southwestern Idaho when he was about 12 years old. After graduating from University of Idaho, Todd started guiding in 1996. He has been with Three Rivers Ranch since 2002, prior to the ranch he guided in Alaska and Chile. ‘The beautiful area and diversity of fishing is what has kept me at Three Rivers. Any stretch of river that’s fishing the best is my favorite.’ In 2009, Todd went to Brazil and fished for peacock bass on the Amazon drainage. Along with fishing, Todd also enjoys bird hunting and golfing. He lives in Ashton, Idaho with his wife and two kids.

Tim was born and raised in Maine. His dad taught him to fish when he was seven years old. Tim moved ‘out west’ in 1989 and has worked in the fishing and skiing industries for the past twenty years. He became a fly-fishing guide in 1997. Tim has a Masters Degree in Biomechanics and an undergraduate degree in Biology. “My background and experience allows me to assess and improve my guests fly-fishing skills in a timely and professional manner. I am patient and have great teaching abilities with each of my clients.” Tim lives in Bozeman, Montana with his wife and two children.