Keeping fly lines from tangling is a common topic whenever two people fish out of a drift boat. Or any boat. If you struggle with this you are not alone. Nothing is more frustrating than firing a cast at a fish only to find the lines hopelessly snarled. Opportunity lost. Avoiding tangled lines is essential for productive flyfishing from a boat as well as the sanity of the anglers. Fortunately, there’s a simple solution.

I’ve been dealing with this problem as a guide for decades and I’ve come to the realization there’s only one solution. NOT having two anglers casting at the same time. This isn’t as hard as it sounds. All you have to do is glance at the other angler and make sure they aren’t already casting BEFORE you start your cast. It only takes a split second. If the other angler is already casting wait until they’ve finished, then make a cast.  This approach will prevent the tangles that lead to missed opportunities, frustration, and arguments about whose fault it is.

The “Ahead Of/Behind The Oarlock” Myth

This is something I hear all the time. The angler in the front of the boat casts ahead of the oarlock, the angler in the rear casts behind the oarlock. Simple solution right? Wrong. I can’t tell you how many times I’ve heard “But I was casting way back there…” The reason this doesn’t work is because it doesn’t take the backcast into consideration. It’s basic geometry. The only lines that never cross are parallel. If one angler is casting ahead of, and the other behind the boat their backcasts will cross. The further away from the other angler’s forward cast, you aim the more severely your backcasts will cross paths. If both lines are in the air at the same time they will end up tangled. Here’s a quick illustration: 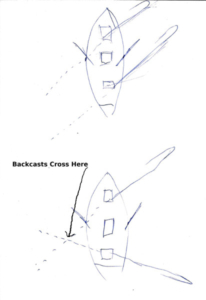 IF you’re both going to cast at the same time you have to be casting in roughly the same direction to prevent tangling your backcasts. If you avoid casting at the same time it won’t matter but keeping the lines close to parallel will help avoid trouble. Not to mention it’s unlikely it will make sense to cast different directions from a fishing perspective. Most often one of the anglers will not be fishing effectively (IE, dragging a fly down the slow water along the bank behind the boat doesn’t often result in a hookup).

The best way to prevent getting fly lines tangled with each other is to only have one angler casting at a time. There’s just no way around it. Next time you’re out floating your favorite river with friends, or with a guide, keep this in mind. It will help you get the most enjoyment from your experience.